About Us • Trinity Lutheran Church History

Brief History of Trinity (more in depth history below)

Trinity was established in 1867 and continues to grow on Broadway. Pastor Rachel Knoke was installed at Trinity in 2015. Today, mission efforts include but are not limited to: 2019 Reframe Titletown (Group Mission Trips), NEW Community Shelter, Crossways Camps, Trinity food pantry, quilters, garden, collaboration with other churches and nonprofit organizations, neighborhood outreach, as well as worship events. Church Keepers organized in 2007 and are in charge of building maintenance.

Membership was 659 baptized and 526 confirmed. Vacant buildings: 309 and 312 S. Broadway were sold in 2005. Unrest and declining membership were prevalent until a vote to reaffirm Pastor Baucom in 2004. Pastor Nathan Tuff was installed in June 1999 as Associate Pastor. Alice Horton was Interim Pastor until Pastor Michael Baucom was installed in 1999. The “Coming Home” project for teens began in 1998. Pastors Lawson and Darrington retired in 1998 along with most of the office staff. Dick Schmeling became Interim Pastor in 1998.

A Lay parish administrator was put in place to assist with some of the non-pastoral responsibilities. Properties at 312 S. Broadway and 301 S. Chestnut were purchased. An ice cream social was held at Seymour Park sponsored by St. Pat’s, First Presbyterian, and Trinity. The social was cancelled in 1995 due to lack of interest. Super Saturday for kids was held with the help of the YMCA. Trinity turned 125 in 1992 – theme was “Reaching back, Reaching up, and Reaching out.” Storytellers from Oneida Tribe spoke at Thanksgiving service. Successful Day Camp held, led by staff from Crossways. Valentine (love) offerings provided gift certificates to families and purchased school supplies for Tank and Fort Howard Schools. Volunteers painted a neighborhood house coordinated through Neighborhood Housing Assoc. Basket of food offerings were brought to the altar the first Sunday of the month. Dinners were served to senior citizens monthly in addition to Mother/Daughter and Father/Son banquets. Multi-cultural dinner was held – those in attendance were encouraged to bring a dish representing their cultural heritage.

Interior of sanctuary was repainted and recarpeted in 1986. Project Access – a remodeling project to the Broadway entrance to improve accessibility for the handicapped and modernize offices was completed in 1986. Radio ministry continued with sponsorship of Project Cargo, a broadcast of the Gospel in Cameroon, West Africa. Radio ministry of worship broadcasts was changed to a half-hour magazine style program, “Morning Has Broken.” Three years later this was terminated. Reconstruction of Church Council and Boards occurred in 1984. Trinity Foundation was established in 1978 for the purpose of acquiring a perpetual fund to be used for educational and benevolent purposes.

Terms “Senior Pastor” and “Associate Pastor” were terminated and all ordained staff were referred to as “Pastor”. In place of parsonages, pastors were given housing allowances. The parsonage, which was in the present courtyard was moved to 212 North Oakland (where it still stands today) and sold. Communion was allowed after study of the sacrament. Women were elected to the Church Council. Sanctuary and chancel were remodeled. A new pipe organ was purchased and installed in the front of the church in 1975. Individualized confirmation instruction began. “Baby in the Barn” (a live nativity presentation at the DeCaster farm) began in 1975.

Average church attendance per Sunday climbed to over 600; there were 1,200 confirmed members. In 1959 the first assistant (associate) pastor was hired, Reverend Wallace Hunstad. Library was begun after combining the Sunday School and Ladies Aid libraries. Addition was completed in 1957 which included present kitchen, auditorium, and classrooms on lower level. The church was also enlarged by extending the balcony and adding the narthex to the west.

Addition of lounge, offices, and Sunday School rooms occurred in 1952. This addition extended north to the stairs that are now the emergency exit. Average church attendance in the early 1950’s was 400-500. The first Trinity Tidings was published bimonthly by the fellowship League in 1948. Broadcasting of the Sunday worship service on radio began in 1948.

Inside of church was remodeled. Improvements included: installation of stained glass window that presently is above the altar on East wall, new pews, new altar, replacement of circular altar railing with one that extended straight across the front of the chancel. The choir pews and organ moved from left front to the church balcony.

Usage of Sunday bulletins began in 1935. All services were in English in 1931. In 1930 the old parsonage was torn down and a new one built in the same location for $8,500. Total indebtedness was between $3,000 and $4,000. A fund drive was held and the entire debt for the new church was paid with a balance of $200 in the general fund. The pastor at Trinity, Reverend T.S. Hanson, also served Zion in Glenmore and St. John’s in Ashwaubenon in addition to Trinity for a combined salary of $1,905.

In 1917 the name of the church was changed from Norwegian Lutheran to Trinity Lutheran. Women were allowed to vote at church meetings. Constitution was translated to English and all services except for one a month were in English.

Two Norwegian language services were replaced with English services each month. Old church was razed and present church was built in 1916 for $16,000.

Total communicant membership at the end of the fourth decade had grown to 778. Oil lamps were discontinued and electric lights installed in 1901. The stained glass windows on the north and south sides of the church were added for a cost of $365.

Total income in 1887 was $773.49; expenses $756.99; Lady’s Aid contributed $226. The bell was purchased in 1888 (which is still used) with Norwegian inscription, “Kommer hid til mig alle I som arbeide og ere besværede, og jeg vil give eder hvile” (Come unto me all ye that labor and are heavy laden and I will give you rest) Matthew 11:28. Lady’s Aid paid for bay window and other improvements in parsonage, however, they did not have voting privileges. Pastor Peterson spent a lot of time in his horse-drawn buggy since he served four additional congregations. A part of his salary was contributions of oats by farmers.

Twenty-three worship services a year were held compared to nine in 1873. In 1879, $0.10 per month was collected from each member to help pay off debt. Second parsonage was built where church stands today; it later was moved one lot north where present courtyard is to make room for the church. Janitor received $40/year; organist $60; pastor $255 plus housing and small salary from four other congregations he served. 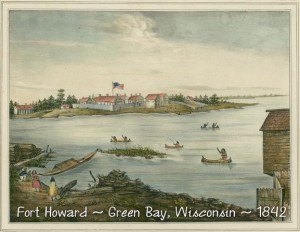 The Norwegian Lutheran Church of Fort Howard was organized by 25 charter members. The first church was built on Broadway Street for $123 in labor costs with dimensions of 44’ x 24’. First parsonage (cottage-like) was built by first Pastor, Reverend Johan Olsen. Total adult membership in 1872 was 142. Seven years after being built, the original church was lengthened 24’, plus a balcony and tower were added. The “Norwegian Ladies Sewing Society” (Ladies Aid) presented $343.67 to the church for furniture and decorations.

There are no upcoming events at this time.

How Great Thou Art